"Sacha, don't overthink this," said a friend of mine. This is not new advice, and naturally made me think about why I've heard it so many times before. (Couldn't help it!)

I can see why people would think that I think too much. I share a lot of thoughts on my blog, and I often ask myself deep questions. Other people play things by ear, but I can usually give a few reasons why I'm doing things or why I'm feeling a certain way. Even when I haven't quite figured out how to express something, people know I'm thinking about it. That said, I can't explain everything. When I try to explain why I do things, I end up helplessly shrugging, trying to describe that--feeling? instinct? intuition?--that _sense_ of what might be the best thing to do at a particular time.

But do I overthink things? Do I strangle my spontaneity in logic and attempt to reduce everything to a logic statement along the lines of "If p implies q then not q implies not p"?

I don't feel that I overthink things. I might give people that impression, though, because I've had a lot of practice thinking about what I feel, I like calibrating myself every so often, and I share those thoughts with other people.

A friend remarked on my ability to articulate what I feel and what I believe in. Like many things in life, reflection is a matter of practice.

I've long thought about what I feel and why I feel that way. One of the mementos my mom keeps in a fireproof safe is a letter that I wrote her when I was very very young. "I hate you," started the letter, and it went on to explain how upset I was that my mom had broken her promise to Kathy about cookies.

I don't remember writing that letter, but I do remember writing about how I hated it when my dad stole food off my plate, especially in front of my friends - and then leaving the notebook conveniently around. I think I even left it open to the right section. My mom picked it up and brought it to my dad's attention, and my dad duly changed his behavior. In fact, he teased us about it during mealtimes, stealing from my sister's plate instead.

Likewise, I've written and talked about what I want to do with my life. My vision changes from year to year, or even from day to day as I learn new things. Still, because I think about my goals and principles and I keep searching for better ways to express them, I've had plenty of practice thinking and explaining the results.

New stuff I think about builds on stuff I've already thought about, which is great! =)

Every so often, I like taking a step back and making sure I'm on the right track. I also feel a deep need to recenter, recharge, and recalibrate whenever I feel something's off. That means taking stock of my goals, my priorities, and my plans for getting from here to there. That means exploring what I feel about certain issues and trying to come to a decision that I respect.

I don't think about the meaning of life all the time, and I try not to worry about things too much. I spend some time thinking about things when I sense that I need to clarify something or when something doesn't quite fit.

I think about these things so that when I am in the moment, I do not need to think. Rather, I can act confidently, knowing that my actions are in line with my principles and values. I love that feeling when you know you're doing just the right thing at just the right time with just the right people. It's definitely worth spending time thinking about one's priorities in order to get that aha! moment.

The third factor that makes people think I overthink is that I think out loud: on my blog, in

I like sharing my thoughts for many reasons. Other people are going through similar difficulties, and they often have insights and tips to share. Talking with other people keeps me honest, too. In fact, I often prefer small- or medium-sized groups over one-on-ones when it comes to conversation.

Random Japanese sentence: 私は私の可愛い猫を自慢に思っています。 I am proud of my pretty cat.

Picture by laspompis on Flickr. License: Creative Commons, attribution
Permalink, Mail me (private comments), Add to del.icio.us -- Back to top 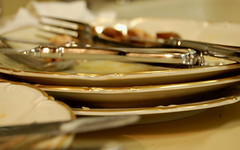 I love my family to bits. Here's a recent story from my mom:

Hi Sacha, we spent the night here in Alabang. Kathy (for the most part) and I cooked. although papa volunteered to wash the dishes, he was overwhelmed by the task - because we had guests :). Last night he joked that he would like to go back to the Philippines so he could call Jeanna to wash dishes.:D Actually, he went to bed promising to do the dishes in the morning but Tita Liz and Jed took charge and cleaned everything after papa went upstairs. I didn't tell papa. ;) When he woke up, he said he would do as promised. When he saw that all the dishes had been cleaned, he said his fairy godmothers came to do the work for him. But he did wash the dishes that we used at breakfast. He is being broken in, and we're having fun. Wish you were here.

Papa asked, "Whats the best way to wash dishes?" Kathy answered, "Dial (our home phone number), and tell Jeanna you'd pick her up in half an hour." :-D Seriously though, Papa did a great job.

I love how my family jokes with each other. =) 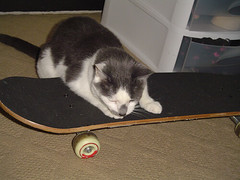 I bought a skateboard today. It kept bubbling up in my consciousness, so I finally went ahead and got one. I headed down to the skateboard shop in Kensington Market and talked to the person at the counter about what I wanted. She talked to me about my options and advised me not to go for the cheap already-assembled ones or buy a used one. I thought she made sense. =) If I'm going to try this out, I might as well pay for good stuff so that I don't have to struggle with it. Nice, big wheels, good tracks, etc. I got a used deck, though, as I don't really need a bright and shiny one. I'm also not planning to do any tricks that'll really chew up my board... ;)

I spent the next hour or so figuring out how to travel in a straight line. I still haven't quite figured out how to come to a sudden halt, although I've gotten the hang of using my foot to speed up or try to stop.

What I really, really appreciate about skateboards is that when I panic, I can _get_ _off._ It so totally owns bicycles and inline skates in that respect. Being able to get off the board when I feel even the least bit worried saved me quite a number of falls earlier!

I used it on the way back, too. The road going up to Harbord (one street west of Spadina) was fairly quiet and car-free, so I tried it out. I managed to make it all the way up to Harbord without doing a faceplant! Happy girl. I didn't dare try it with the cars and people on Harbord Street, though, but I'll get there soon enough.

I'm cooling off in my dorm room a bit before heading along Bay to deposit those checks and go to Indigo. Bay is a busy street, so I won't take my skateboard. Besides, I've practiced enough for today. I'm looking forward to playing with it more tomorrow, though!

Random Japanese sentence: たとえどしゃぶりになろうとも行かなければならない。 I have to go even if it rains cats and dogs.

Permalink, Mail me (private comments), Add to del.icio.us -- Back to top