Simon Rowland and Roger Yang invited me to go rock-climbing at Rock Oasis (Front and Bathurst) last Friday (2006.08.11). Richi Plana and I headed there after he dropped his backpack off at the hostel, and I texted Jedediah Smith and Quinn Fung to see if they'd be interested in joining us. It turned out to be such a terrific experience! 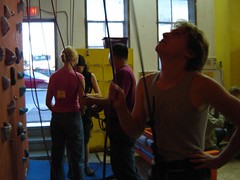 Although I went rock-climbing with Cyril Tubianosa and other college friends a long time ago, I couldn't remember enough to climb on my own, so I registered for the introductory class. Richi did too. Quinn and Jed were waitlisted for the class, but made it in when the other people didn't show up. It was fun learning a new skill with close friends.

While we learned the ropes, Simon and Roger took turns climbing challenging walls. By the time we finished, they were also done!

Fortunately they were not too tired to help us. I asked Simon to belay for me as I tried climbing. The 5.7-level wall turned out to be a bit too challenging, so I went for the 50' 5.6 wall instead. I had completed a 5.6 wall during the beginner class, so I figured I could handle it.

50 feet, apparently, is quite a distance, particularly for someone new to climbing, with a weak grip and little endurance. When my fingers gave up, I used anything else I could: the side of my palm, my forearm, even my elbow. I frequently shook my hands to get rid of the fatigue and often sat back to figure out a strategy for making my way up. Whenever an approach failed, I'd try another, and another, and another. Hold by painful hold, I made my slow way up.

Every time I lost my grip, my friends learned more about the limits of my vocabulary. They knew I was getting serious when I graduated from "Ay, CRAP!" to "DARN!" They were rather amused when I tried out "Fish!" and "Fudge!" for size. (I like "Fudge!" It makes me think of chocolate.) 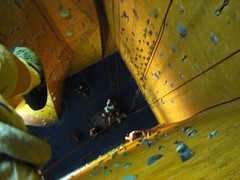 It took me more than thirty minutes to reach the top. Aside from a brief break to get a drink and maybe a quick climb, Simon talked me through the entire thing. Every time I'd get stuck on a set of holds that seemed impossible, he mimed different strategies for getting past it. When I was about to give up, he told me that I was over the hard part already. (Why I believed him, I don't know. ;) ) He kept encouraging me further and further, making sure that I kept the ground I gained. 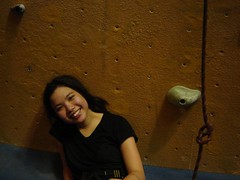 I reached the top and slid back down to the ground in blissful relief and accomplishment. "You're such a trooper," said Simon.

And hey, yeah, that's true. If I think something's worth it, I'll keep going for it—and that's just so much more fun with encouragement. =)

Permalink, Mail me (private comments), Add to del.icio.us -- Back to top